Black Hawk's Account of Tecumseh's Death at the Battle of Thames

Here’s another look at the death of Tecumseh as told by Black Hawk to an old settler from Illinois. It was first published in the Baltimore American. This version is from the Liberty (Mississippi) Advocate, December 20, 1838.

Hearing; of the death of the Sauk Chieftain Black Hawk, I am induced to make you the following communication, which may be interesting to some of your readers.

During a residence of several years in what is now the territory of loway, I had many opportunities of seeing and conversing with the noted warrior, and often look back with feelings of great pleasure to the many tokens of goodwill and friendship that he has frequently bestowed upon me. His lodge was always open to the stranger, and he was ever ready to share that with him which he might most want, either his furs and blankets for a couch or his corn and venison for a repast. He always spoke in terms of high regard of the whites, saying that in war he" fought like a brave man, but in peace, he wished to forget that his hand had ever been raised against them. His career as a warrior commenced at a very early age; when he was but fourteen years old, his father, Pawheese, led a war party against the Osages in which expedition he accompanied him; they succeeded in reaching the village of the Osages, which they attacked, and after a very severe encounter, they routed their enemies and burnt their town. In this battle, Black Hawk's father was killed, but he revenged his death by killing and scalping the Osage who had slain him. He was fond of recounting his early exploits, and often boasted of his being at the right hand of Tecumseh when the latter was killed at the battle of the Thames. His account of the death of this distinguished warrior was related to me by himself, during an evening that I spent in his lodge some winters ago. In the course of our talk, I asked him if he was with Tecumseh when he was killed.

He replied: “I was, and I will now tell you all about it. Tecumseh, Shaubinne and Caldwell, two Pottawattamie chiefs, and myself were seated on a log near our campfire, filling our pipes for a smoke, on the morning of the battle, when word came from the British general that he wished to speak to Tecumseh. He went immediately, and after staying some time rejoined us, taking his seat without saying a word, when Caldwell, who was one of his favorites, observed, my father, what are we to do? shall we fight the Americans? Yes. my son," replied Tecumseh. "We shall go into their very smoke, but you are now wanted by the general. Go, my son, I never expect to see you again."

Shortly after this (continued Black Hawk,) the Indian spies came in and gave word of the near approach of the Americans. Tecumseh immediately posted his men in the edge of a swamp which flanked the British line, placing himself at the head. I was a little to his right, with a small party of Sauks. It was not long before the Americans made their appearance; they did not perceive us at first, hid as we were by the undergrowth, but we soon let them know where we were by pouring in one or two volleys as they were forming into line to oppo[se] the British. They faltered a little, but very soon we perceived a large body of horse (Col. Johnson's regiment of mounted Kentuckians) preparing to charge upon us in the swamp.

“They came bravely on, yet we never stirred until they were so close that we could see the flints in their guns, when Tecumseh, springing to his feet, gave the Shawnee war cry, and discharged his rifle. This Was the signal for us to commence the fight, but it did not last long; the Americans answered the shout, returning our fire, and at the first discharge of their guns. I saw Tecumseh stagger forwards over a fallen tree near which he was standing, letting his rifle drop at his feet. As soon as the Indians discovered he was killed, a sudden fear came over them and thinking the Great Spirit was angry, they fought no longer and were quickly put to flight. That night we returned to bury our dead and search for the body of Tecumseh. He was found lying where he had first fallen; a bullet had struck him above the lip, and his skull had been broken by the but end of the gun of some soldier, who had found him perhaps when life was not yet quite gone. With the exception of these wounds, his body was untouched; lying near him, however, was large fine-looking Pottawattamie, who had been killed, decked off in his plumes and war paint, whom the Americans no doubt had taken for Tecumseh, for he was scalped, and every particle of skin flayed from his body. Tecumseh himself had no ornaments about his person, save a British medal. During the night we buried our dead, and brought off the body of Tecumseh, although we were within sight of the fires the American camp.”

This is somewhat different from the account which is commonly given of Tecumseh's death, yet I believe it to be true; for after hearing Black Hawk relate it, I heard it corroborated by one of the Pottawatomie chiefs mentioned by him. I asked him if he had ever fought against the whites after the death of Tecumseh. He said not that he returned home to his village on the Mississippi, at the mouth of the river, and there he remained until driven away by the whites in the year 1832. The wish to hold possession of this village was the cause of the war which he waged against the whites during that year. He told me that he never wished to fight, that he was made to do so; that the whites killed his warriors when they went with a white flag to beg a parley, and that after this was done, he thought they intended to kill him at all events, and therefore he would die like a warrior.

In speaking of his defeat, he said it was what he expected; that he did not mind it, but what hurt 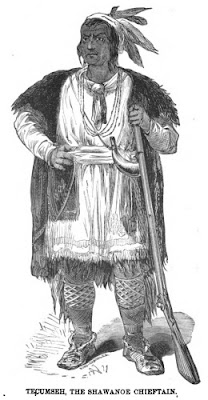 him more than anything else, was our government degrading him in the eyes of his own people and setting another chief (Keokuk) over him. This degradation he appeared to feel very sensibly, still, he continued to possess all his native pride. One instance that came under my observation, I recollect well, in which it was strongly displayed. He happened to be in a small town in loway on the same day in which a party of dragoons, under Capt. arrived, and in paying a visit to a friend with whom he always partook of a meal, whenever he stopped at the village, he met with the captain who had been invited to dine. Black Hawk remained also expecting the usual invitation to stay and eat with them, but when the dinner was ready, the host took him aside, and told him the captain, or rather the white man's chief was to dine with him that day, and he must wait until they had finished. The old chief’s eyes glistened with anger as he answered him, raising the forefinger of one hand to his breast to represent the officer. "I know the white man is a chief, but I,” elevating the finger of the other hand far above his head, "was a chief and led my warriors to the fight long before his mother knew him. Your meat—my dogs should not eat it." Saying this, he gathered the folds of his blanket about him, and stalked out, looking as proudly as if he still walked over ground that he could call “my own.”

Black Hawk possessed, to a great degree, one fine trait which it is not usual for us to concede to the Indian. Kindness and affection for his wife. He never had but one, and with her, he lived for upwards of forty years; they had several children, three of whom still survive, two sons and a daughter. The eldest son is now one of the most promising young braves of the nation, and bids fair to be one of its most noble men. The daughter is still quite young and is considered to be the most beautiful maiden belonging to her tribe.

He has now departed on his long journey to join those of his people who have gone before him to their happy hunting grounds far beyond the setting sun. May the Great Spirit grant him a clear sunshine and a smooth path.
Posted by history blogger at 6:04 PM

Grab your copy on Amazon