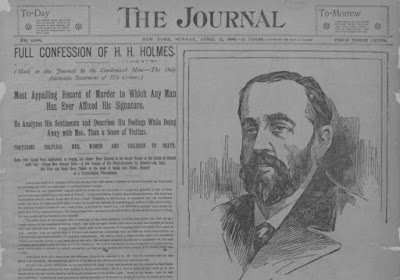 “I killed twenty-seven.” He would have murdered six more had circumstances, not intervened.[1]

The murderer’s real name was Herman Webster Mudgett—a New Hampshire farm boy, and the son of devout Methodist parents. Mudgett worked on his parent’s farm at Gilmanton until he graduated from high school, then taught school. The next year he married Clara Lovering, his high school sweetheart.

Teaching was good, but medicine was Mudgett’s ruling passion. In 1879, he enrolled in the medical program at the University of Michigan at Ann Arbor. He studied anatomy under Professor Herdman, and dissection under the direction of Dr. Nahum Wight.

That led to digging up bodies at local cemeteries — some that he experimented on, and others that he sold to medical students for the cadaver lab. Soon, Mudgett moved on to bigger crimes.

He purchased a $15,000 insurance policy on his life, then passed a cadaver off as himself to collect on the policy. It was a deception he would repeatedly pull from then on.

Mudgett graduated from the Ann Arbor, medical school in 1884. He left his wife in 1887 and moved to Chicago where he became a clerk at a drugstore at No. 700 Sixty-third Street. Several months later, he owned the property and began construction on what would become known as his murder castle.

You know what they say? A new city, a new start.

Shortly after he moved to Chicago, Mudgett changed his name to H. H. Holmes.

Read more »
Posted by history blogger at 9:57 AM No comments:

The rest of the family had gone to the Fourth of July festivities in Rock Island. The Colonel stayed home to keep watch over his property because he had seen several suspicious characters lurking around the island the day before.[1]

The gang—Robert Birch, William Fox, John Long, and Aaron Long—concocted their final plan at Grant Reddin’s house on Devil Creek. They traveled to Fort Madison, then on the steamboat Osprey to Albany, Illinois. Most likely, they fine-tuned their plan along the way.[2]

The robbery of Colonel Davenport was a “favorite scheme” of the gang. Everyone knew the Colonel was wealthy. The band expected to find at least $30,000 in cash and specie at his home on Rock Island. Instead, their take was closer to $600.

They camped in the woods about ten miles outside of Albany. That gave them time to work another scheme along the way. The story was there was a man named Miller nearby who kept a lot of money on his property. Fox decided to test him first before they made their move. He asked Miller to cash a ten-dollar banknote. When Miller couldn't cash the bill, they gave that idea up.[3]

The men walked back to Albany that night, stole a boat, and made their way downriver to Davenport’s island in the middle of the Mississippi. The gang bided their time waiting for the perfect moment. Aaron Long bought food and other supplies at Rock Island. John Long made a whiskey run on July 3rd.[4]

Later that day, the boys met with John Baxter, another gang member who lived in Rock Island.[5] They met behind J. W. Spencer’s place to hash out the final details.[6]

Baxter watched the Davenport house on the Fourth. When he was sure everyone had left except the Colonel, he let the band know it was time.[7]

Read more »
Posted by history blogger at 8:13 PM No comments:

Grab your copy on Amazon